During WW1, China started supporting the allies by sending labou 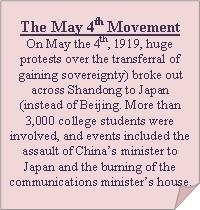 rers to Europe to help the war effort. Through this, they hoped to regain parts of China held by Germany following their defeat. However, there was a pre-existing agreement between the allies and Japan, promising the Shandong Province to them, as well as all other German Pacific territories/islands north of the equator (although Japan still wasn’t happy as they didn’t get given all of the requests they made over land).

When this was revealed in the Paris Conference (which created the Treaty of Versailles), it led to an outburst of student protests that culminated
in the May 4th Movement. To make matters worse, a Chinese warlord had been bribed by Japan into allowing the occupation. China was unhappy about this arrangement, and this resulted in them walking out of the Paris Peace Conference and refusing to sign the treaty.

Two men who had been involved in the protests, Li Dazhou and Chen Duxiu, then turned to Marxism for a solution, after seeing the success of Russia’s Bolsheviks in the Russian Revolution and from this, founded the Chinese Communist Party (1921, Shanghai) as both a revolutionary movement and a political party.

United to fight the Warlords

In 1924, Sun Yat Sen and the Nationalist Party formed an alliance (The United Front) with the Communist Party to build a republican army. A military academy was set up to train officers in fighting the warlords, and a man named Chiang Kai Shek / Jiang Jieshi took the role of first commander. When Sun Yat Sen died in 1925, Chiang took over as the leader. with the aid from the Soviet Union, and the next year saw him launch the Northern Expedition. This was an attempt to drive through the north of china, from Canton to the Yangtze River, overthrowing warlords in the process. With Soviet help, they gained control over most of south-east China (where the majority of China’s population and cities were located) within the year, and Beijing was taken in 1928 – ending the expedition. The country was reunited and a new capital was established in Nanjing.

However, there was unease within the Nationalist Party. Many members were unhappy with Communists being part of the party, especially nationalist businessmen and landowners who were threatened by the communists’ encouragement of strikes and peasant unrest. The left and right wings of the party became deeply divided in the 1920’s.

Sun Yat Sen had seen the communists as allies and friends, but the arrival of Chiang Kai

Shek brought along a new approach too. He saw them as a threat and enemy of the party. However, their alliance was crucial for getting support from the Soviet Union.

When the Nationalist forces reached Shanghai in April 1927, they had no need to keep up the façade anymore and the nationalist troops massacred anyone suspected of communist connections in what was known as The Shanghai Purge (or the White Terror [April 12th, 1927]).

Hundreds suspected of Communism (or communist connections) were killed with a further 5,000 missing and 1,000 arrested.

After the massacre, the communists continued to be suppressed and most were driven out of cities and forced to go into hiding in the countryside.

Let someone else know:

Please let me know what you think! Cancel reply

Follow A cat, a book and a bowl of soup on WordPress.com

A helper guide to biology students

For Students, From Students
THE PORTAL

LESSONS AND IDEAS FOR ALL AGE GROUPS

A bit of entertainment, a dash of awareness and a whole bunch of vocal cats!

Views and Mews by Coffee Kat